This market-embedded hydropower specialist is extensively involved in a lot of large-scale hydropower and dam projects across the UK, Asia, and Africa. They have also...

This highly experienced subject matter expert has spent over four decades in the heavy construction and engineering area, with a specialism in RCC dams and...

Having gained more than 31 years of experience across a variety of roles and sectors, this electrical engineering expert has in-depth insight and knowledge of...

This particular hydropower expert has a very strong scientific background and has held the role of Scientific Officer for hydropower at the European Commission Joint...

Get insight into Hydropower

The Future Of Hydropower

Hydropower, or hydroelectric power, is one of the oldest and largest sources of renewable energy, which uses the natural flow of moving water to generate electricity. Ancient Greeks employed waterpower more than 2,000 years ago to drive wheels for grinding grain; nowadays, it is one of the most affordable ways to produce electricity and is frequently chosen when it is an option. There are several different types of hydropower systems, but all of them involve using the energy of flowing water to turn a turbine, which then generates electricity. The most common type of hydropower plant is the dam, which creates a large reservoir behind it. As water flows through the dam and down through a channel or pipe, it turns a turbine, which generates electricity.

Uses Of And Advantages Of Hydropower (Dams)

Hydropower benefits the communities that it serves in a number of ways. By offering important power, storage, and flexibility services, hydropower and pumped storage continue to be instrumental in our fight against climate change. The advantages of hydropower are outlined below as the US moves toward 100% clean electricity by 2035 and net-zero emissions by 2050.

• Hydropower is a renewable energy source since it depends on the water cycle, which is fuelled by sunlight.
• Hydropower is a clean source of energy because it is powered by water.
• As a home energy source, hydroelectricity enables each state to generate its own energy without relying on foreign fuel sources.
• Hydropower has a low cost. Compared to other energy sources, hydropower offers cheap electricity and long-term durability. Even employing pre-existing buildings like bridges, tunnels, and dams can save construction costs.
• Other renewable energy sources are complemented by hydropower. When energy demand is high, technologies like pumped storage hydropower (PSH) store energy for usage in conjunction with renewable sources like wind and solar power.

Countries are adopting hydropower more and more, because of the benefits. For instance, hydropower generates 99% of the electricity in Norway and the 22.5-gigawatt Three Gorges Dam in China is the largest hydropower facility in the world. It generates between 80 and 100 terawatt hours annually, sufficient to power between 70 million and 80 million households.

There are many other hydropower projects being developed around the world, including smaller, run-of-river projects and tidal energy projects.

There are several limitations to hydropower as a source of energy:

Infrastructure: Building large hydropower plants, such as dams, can be costly and time-consuming. In addition, these projects often require the construction of roads, transmission lines, and other infrastructure, which can have negative impacts on the environment and local communities.

Environmental impacts: Dams can have negative impacts on the environment, such as disrupting the natural flow of rivers and affecting the habitats of fish and other wildlife. In addition, the construction of large hydropower plants can cause erosion and landslides.

Intermittency: Hydropower is not a constant source of energy, as the water cycle is not always consistent. This means that hydropower plants may not be able to generate electricity at all times.

Limited potential: While hydropower is a significant source of electricity in many countries, it has limited potential for expansion in many regions. There are only a limited number of suitable locations for large hydropower projects, and many of these have already been developed.

Overall, while hydropower is a valuable source of clean, renewable energy, it is important to carefully consider any hydropower project’s potential impacts and limitations.

The Future Of Hydropower

Modernizing the current hydroelectric infrastructure might boost output, make up for some drought-related losses, and guarantee that the plants can run for many years to come.

Globally, $127 billion will be spent on updating outdated plants between now and 2030. This amounts to about one-fourth of all hydropower investments made worldwide and almost 90% of those made in Europe and North America.

This involved upgrading some of the turbines at Hoover Dam to function more effectively at lower elevations, installing thinner wicket gates to restrict the flow of water into the turbines, and inflating the turbines with compressed air to boost efficiency.

However, the majority of investment is going toward new plants in other parts of the world. Over 75% of additional hydropower capacity is anticipated to come from large, state-owned projects in Asia and Africa by 2030. However, some people are concerned about the effects such projects would have on the environment.

Global hydropower growth is declining and is anticipated to decline by roughly 23% by 2030. The capacity to reverse this trend will mostly depend on expediting the permitting and regulatory procedures, as well as establishing rigorous sustainability criteria and emissions monitoring programmes that are accepted by the community. A quicker development schedule would make it easier for developers to secure power purchase agreements, encouraging investment because profits would be certain.

Overall, hydropower is a valuable source of clean, renewable energy that can help meet the growing demand for electricity worldwide. It is important to carefully consider the potential impacts of hydropower projects and to use a variety of energy sources to create a more sustainable and resilient energy system. Whilst hydropower has many benefits, we must consider the disadvantages and come to an accurate decision when deciding to choose hydropower. 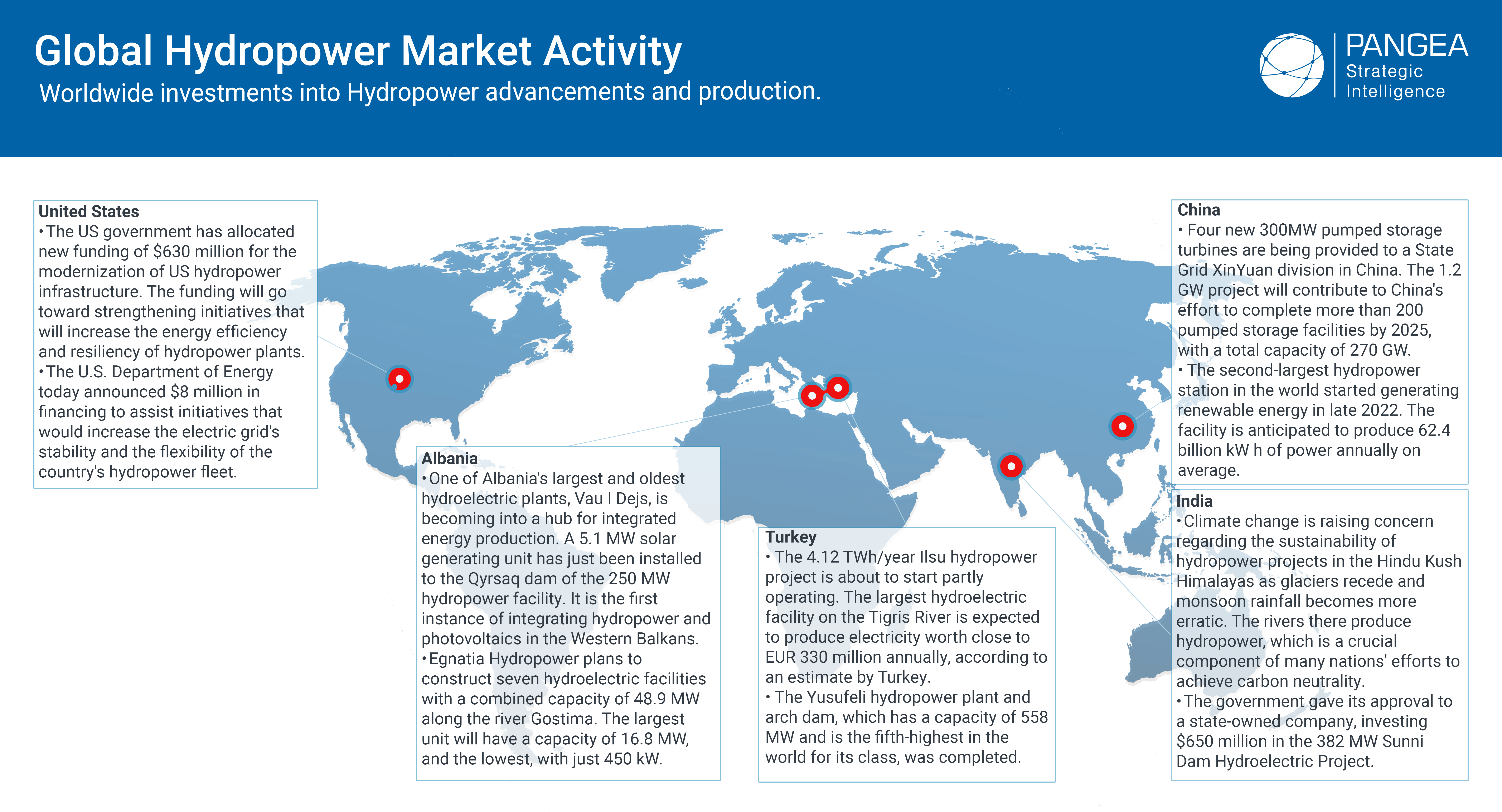 ✓ How can Solar PV fit within your project?
✓ What steps should we take to alleviate common challenges with Solar PV farms?
✓ The mitigation of policy, regulation, and financing challenges.
✓ Specific requirements of country-related construction.

The Impact Of The Information

More Confident Investment Decision Making
Expect to make truly informed, risk-reduced decisions. 100% of our clients believe our platform has enabled them to “increase the speed of their early-stage research into new areas.”

Insights On Demand – in as little as 48 hours
You can access subject matter experts from anywhere in the world, whenever you need them. When technical challenges or commercial projects arise which need specific results, you can obtain valuable consulting recommendations from vetted Experts.

Commercially Effective Research
Your research capacity and capabilities are augmented through Pangea SI Experts – there is no need for hefty strategy/management consultancy retainers and you can forego the process of having to hire someone full time. 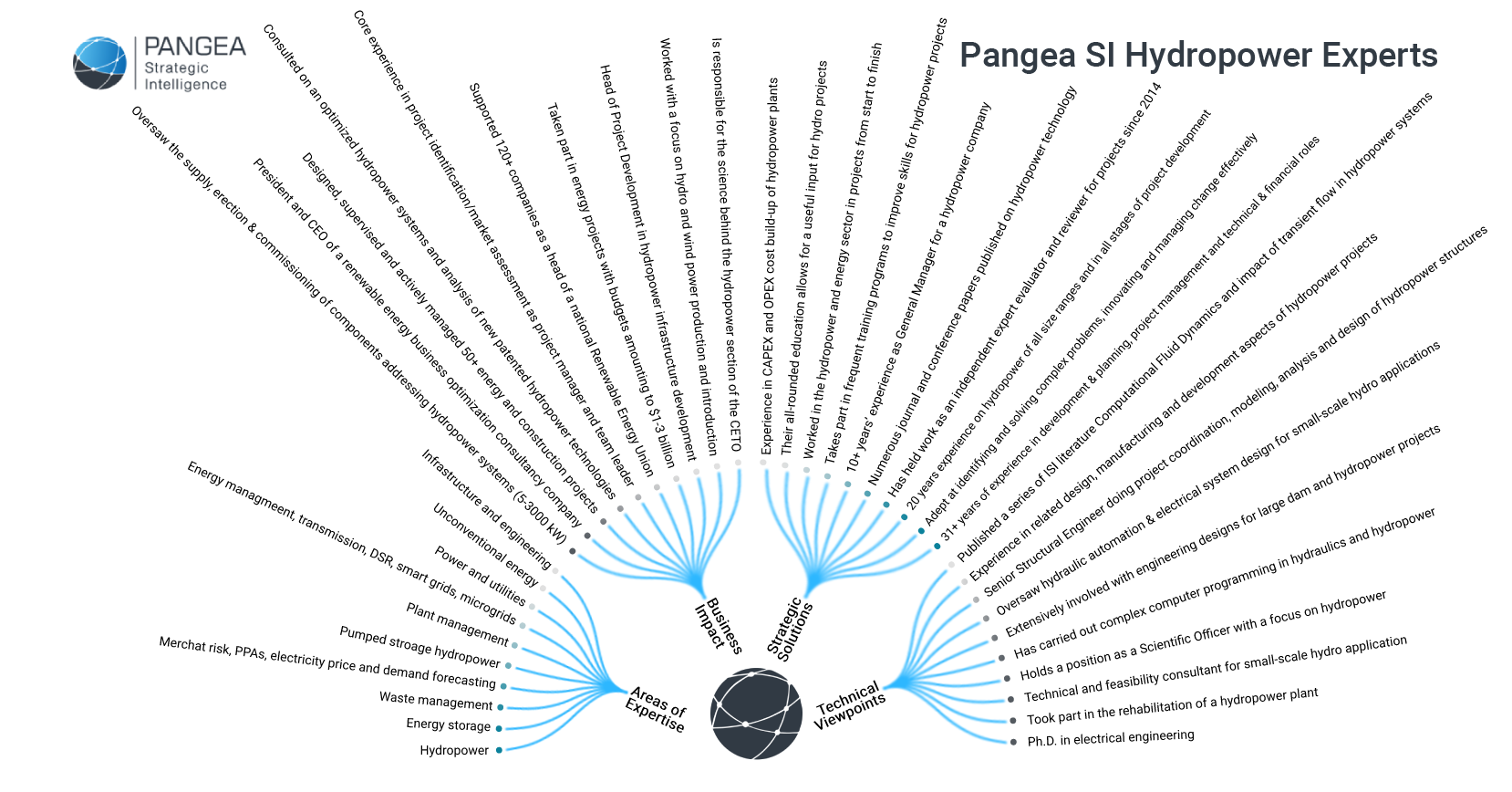 Our Hydropower Experts can provide powerful insights, into this world-leading renewable energy industry.