This subject-matter expert has a total of 18 years of experience working with Federal, State and private entities mostly in the state of Texas in...

This expert has more than 15 years of experience assessing chemical impacts on lakes, rivers, groundwater, and soil, as well as the people and organisms...

This market-embedded expert has an 18+ year career in waste, soils and organic amendments which has led them towards environmental regulation science. They have worked...

With over 15 years of experience in the conservation field across private, federal, and local agencies this expert can offer a wide range of technical...

Get insight into Carbon Sequestration

CCS generally involves the use of technology to capture and store carbon dioxide emissions from various sources with the overarching goal of reducing climate change. By stabilising carbon in solid and dissolved forms, the emissions then become less harmful to the environment and reduce global carbon footprints.

What Are the Different Types of Carbon Sequestration?

There are broadly three types of carbon sequestration: biological, geological, and technological, each of which can be further broken down.

Biological carbon sequestration refers to the capture and storage of carbon dioxide in grasslands, forests, oceans and soils.

Geological carbon sequestration stores carbon dioxide in geologic formations or rocks underground through its porous surfaces. The process of storing carbon requires human intervention as carbon dioxide must be captured from human activities and injected into the rocks to store for longer periods of time.

Technological carbon sequestration, on the other hand, focuses on discovery and creation of innovative technology to trap and store carbon. Other appealing alternatives of what to do with the carbon also exist, such as how it can be potentially used as a resource.

The most significant challenge for the CCS market to overcome is perhaps the towering costs involved with setting up and implementing technology to capture carbon. It has been estimated that the levalised cost of production with CCS ranges around $70-$130 per tonne in cement production. Despite these soaring costs, the overall capital involved with setting up infrastructure for CCS is, in fact, still cheaper than most alternatives (such as electrolytic hydrogen) and is an inevitable cost with the new stringent measures set up by governments to fight rising carbon emissions.

Many companies also view CCS as a short-term solution to meet set government net-zero goals rather than focussing on addressing business processes that are creating high carbon emissions. An example of this being major fossil fuel and coal-fired power generation firms relying on CCS to reduce the net level of emissions they produce. As such it is important for businesses to remember that CCS should be used adjacently and in addition to further decarbonisation efforts.

Governments and administrations will need to play a significant role in helping to develop CCS initiatives along by providing financial incentives and favourable policies for investors with an interest in projects aimed at decreasing carbon dioxide levels.

The public sector can mitigate some of the threats and risks associated with CCS by creating comprehensive guidelines for the private sector to follow and abide by. If CCS is incorporated and embedded into national plans of decarbonisation, it will likely be able to kickstart the process of becoming carbon neutral and act as a catalyst to ensure countries are on the right track. By introducing bills that recognise CCS efforts in the form of carbon credits or government subsidy programs for CCS projects, the public sector will be able to bolster the interest in these technologies to overcome the high cost barriers these firms face.

The scientific community has brought forth a number of suggestions to help CCS projects which include:

The CCS market is likely to expand to a $200 billion market as it will play an integral role for world economies in meeting carbon-neutrality agreements. The International Energy Association has stated that CCS will need to scale operations from the current 40 MtCO2 capacity (as of 2021) to reach nearly 1,150 MtCO2 by 2030. Governments will have to be careful to ensure that CCS is not abused by fossil fuel and non-renewable energy companies as a mechanism to cut corners and meet climate goals strictly speaking, rather than addressing their carbon-producing business operations. However, in the meantime, CCS technology is still a viable product to tackle carbon dioxide levels and the market will undoubtedly see a rise in popularity as it continues its key role in global decarbonisation.

Notable CCS Projects in the market include: 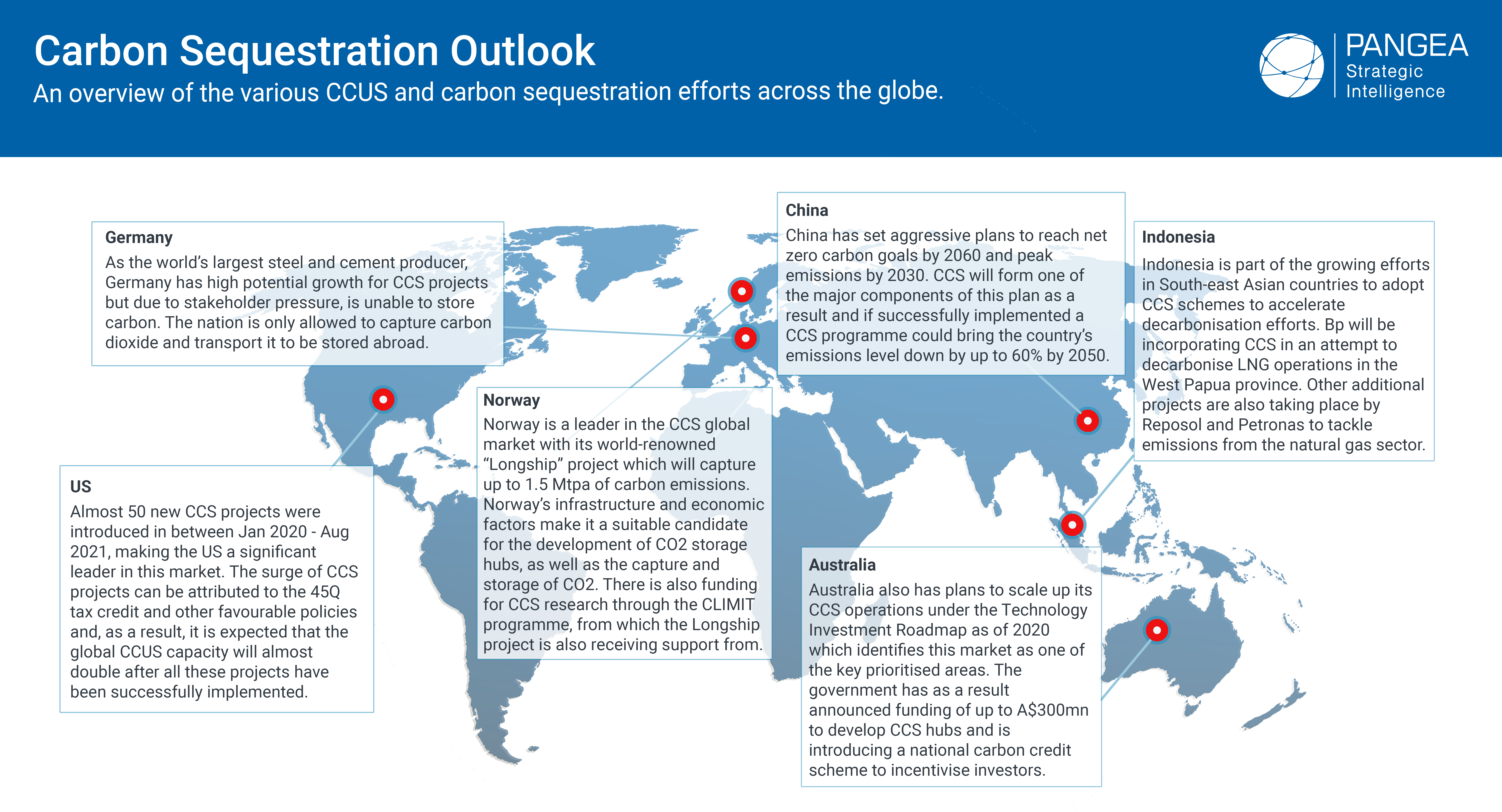 The Impact Of The Information

More Confident Investment Decision Making
Expect to make truly informed, risk-reduced decisions. 100% of our clients believe our platform has enabled them to “increase the speed of their early-stage research into new areas.”

Insights On Demand – in as little as 48 hours
You can access subject matter experts from anywhere in the world, whenever you need them. When technical challenges or commercial projects arise which need specific results, you can obtain valuable consulting recommendations from vetted Experts.

Commercially Effective Research
Your research capacity and capabilities are augmented through Pangea SI Experts – there is no need for hefty strategy/management consultancy retainers and you can forego the process of having to hire someone full time.

Our Carbon Sequestration Professionals can provide world-beating insight and know-how in a way that others cannot.

Get Your Expert Solution Today
×