The first electric bus, operating in London between Victoria station and Liverpool Street, was powered by its own battery and had a range of up to 40 miles before needing a new charge. However, the battery was designed to overcome this charging constraint through a quick and easy way to change the battery in less than three minutes. Unfortunately, this initial e-bus scheme quickly had to stop after a series of legal battles over the patent.

The Expected Potential of Electric Buses

With modern-day technology, the global electric bus market is back on the rise as climate change becomes an increasingly worrying issue and fossil fuels become a less feasible option. Technological advances have meant that batteries have become more compact, reliable, and cost-efficient, allowing countries to begin slowly phasing out fuel-powered transport.

Considering all major modes of public transportation, the main emitter is nitrous dioxide which has been known to cause airway inflammation and even negatively impacts lung development during early childhood as well as lung function during adulthood. With private transport being one of the biggest factors in greenhouse gas emissions, it is important that the forms of public transport which cause less environmental harm become more widely available.

China is a great example of what to strive towards – this powerful nation’s arsenal of e-buses accounts for 98% of 112,000 in the global bus market. In comparison, other countries are far behind. For example, all of Europe accounts for a little under 10,000 e-buses and the US has just under 4,000.

E-buses are a large investment due to their high initial cost and the stigma around acceptable battery reliability and expense remains strong. It would therefore be important to consider some of the most popular models that are purchased now:

Other notable electric fleet and public transportation companies include:

When it comes to e-bus investments, government acts and support plans are a signficant consideration. However, there are also other key issues and barriers that need to be considered in order to make the right decision. The aforementioned range of models each have their own performances of varying suitability.

The average cost of an electric bus is 25% more than a diesel-powered bus. However, when you consider that for every 1,000 electric buses on the road, 500 barrels of diesel less are used every day. Considering that electric buses currently only take around 10% of the world’s buses, there is a lot of money that can be saved by avoiding expenditure on diesel.

If the costs of a brand new electric bus or bus fleet is too much, it is possible to repurpose existing vehicle technology by for example replacing certain parts of a diesel bus with a lithium-ion battery that would allow it to be electrically charged. This process costs between 30-50% of the cost of an electric bus making it a much more viable option when it comes to replacing a fleet driven by diesel engines.

Due to the need to recharge batteries and the time this takes, it means new “refueling” management systems need to be developed involving multiple vehicles of the fleet. It is integral that real-time reporting monitors the remaining range and capacity to account for operating hours and local bus service needs. The upcoming trials in In-Motion-Charging, exploring the potential of a magnetic energy transfer technique that does not require a halt in services, like this, could be a major solution to this issue.

In the case that time to recharge still needs to be accounted for in developing a fleet of e-buses, there needs to be a consideration of the different charge times and how far a full battery can take the e-bus before needing to be recharged. For example, London has a bus network of 675 bus routes serving nearly 20,000 stops and around 9,000 buses to cover them. As buses are London’s most used form of public transport, it is integral to their system that the e-buses used are capable of covering this to the same extent a bus with an internal combustion engine has been capable of. 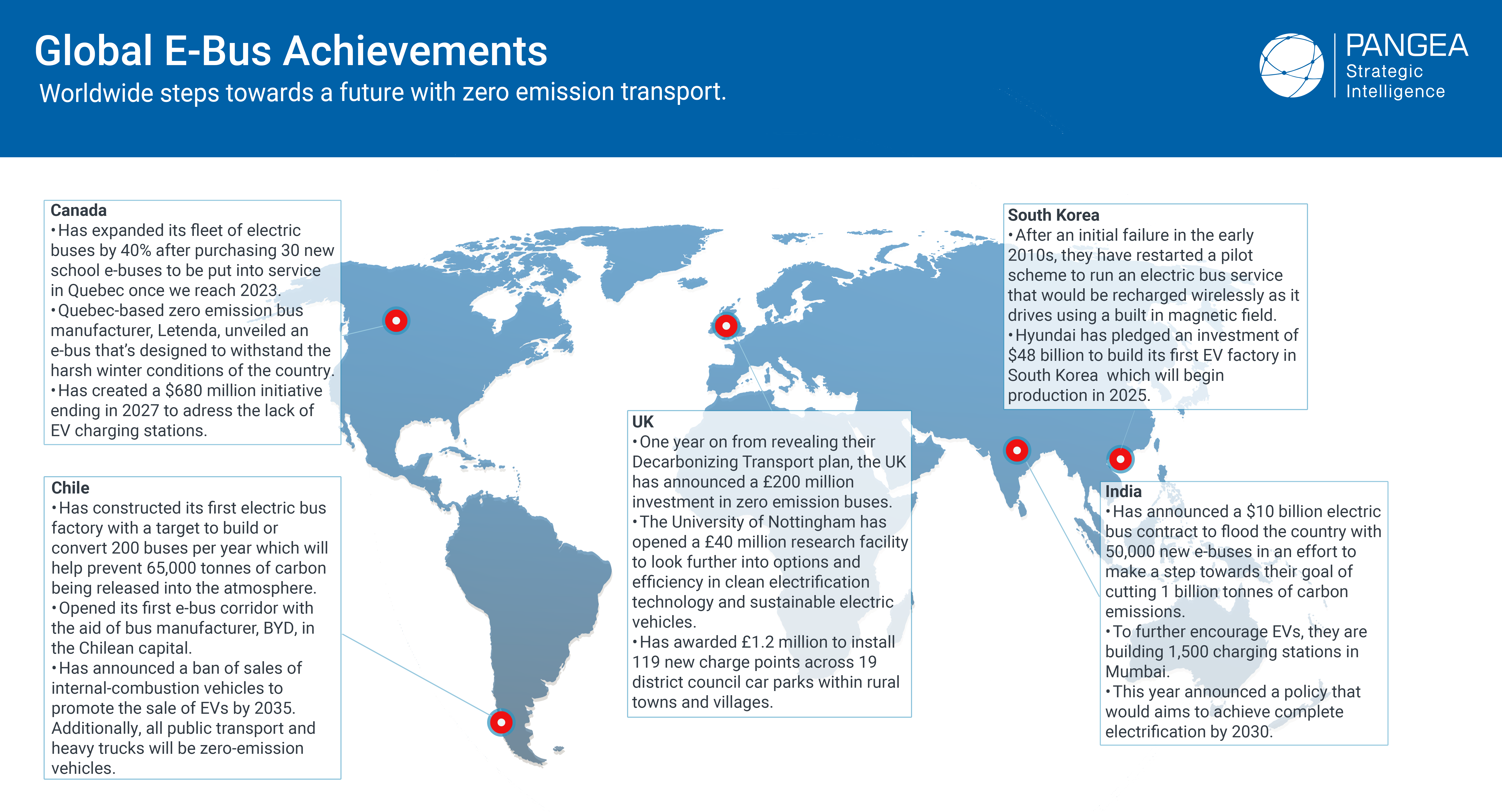 ✓ What is the future regarding e-transport policies of an international range?
✓ What connections may be useful in business involving e-transport?
✓ What are the most suitable companies and models to invest in?
✓ What is the best process for initiating an e-bus project? 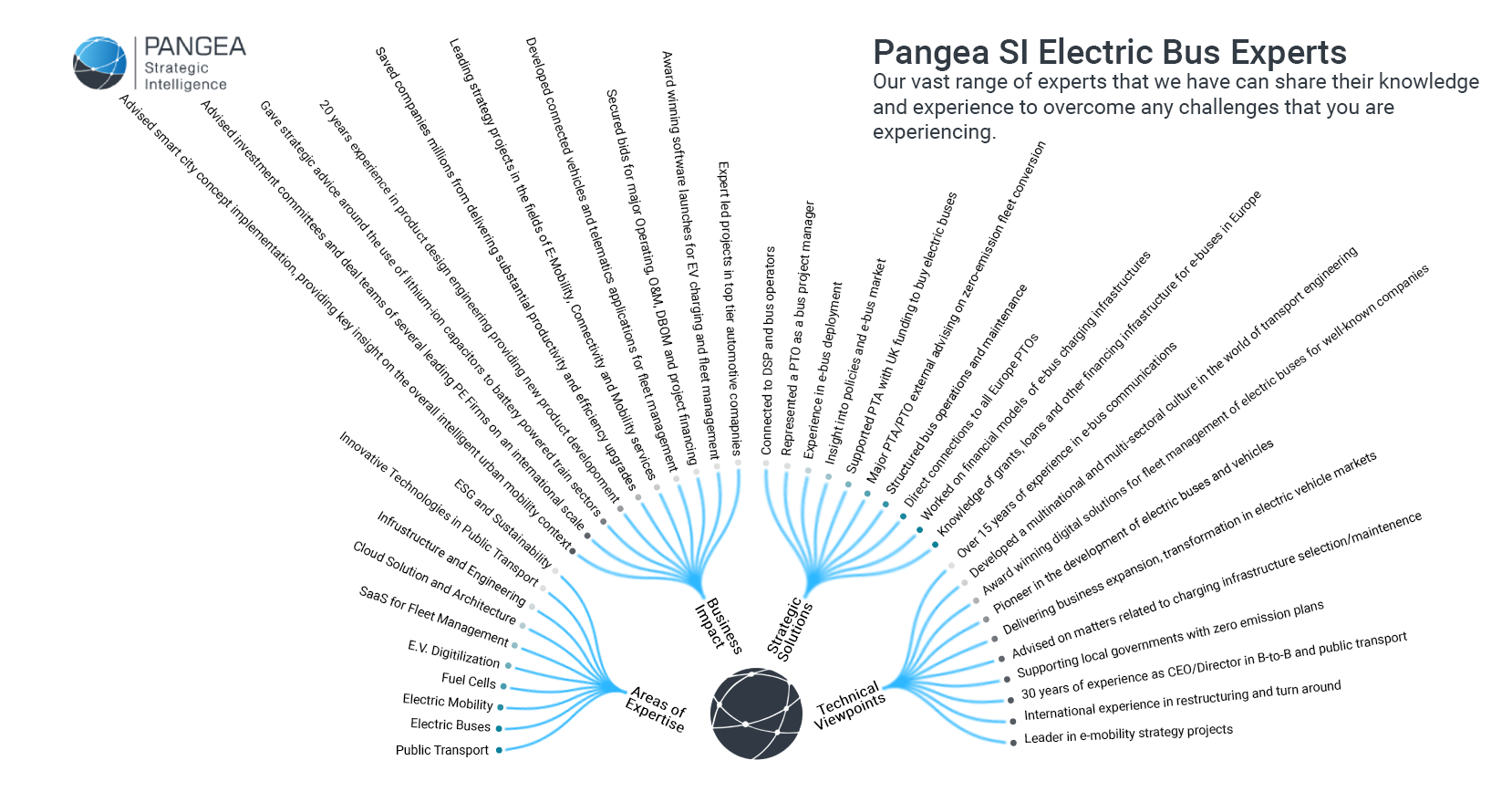