This expert is a specialist in Bulk Explosives with a master’s degree in Chemical Engineering and over 12 years of professional experience managing complex projects...

This expert currently works as an Explosives Specialist Manager. They have spent the last 32 years in the mining industry leading technical study projects and...

This expert has tertiary qualifications in Chemistry, with over 10 years of experience in the explosive industries. Held high-level roles such as Business Development Manager,...

Get insight into Explosives

An explosive (or explosive material) is a reactive substance that contains a great amount of potential energy that can produce an explosion if released suddenly.

The 3 fundamental types of explosives are mechanical, chemical and nuclear. A mechanical explosive is one that depends on a physical reaction such as overloading a container with compressed air, a mechanical device is often used in mining where a chemical reaction is undesirable.

A chemical explosive is a mixture that when subjected to heat, impact, friction, or detonation, it undergoes a rapid chemical change, involving large volumes of heated gases that exert pressure on a surrounding medium. A nuclear explosive is a device that from a nuclear reaction, releases a vast amount of energy that causes an explosion.

The 3 types of explosives that we will be focusing on are:

Uses and Why We Need Them

In recent years, the largest commercial application of explosives is mining, which has increased their usage in surface and underground mines. Whether the mine is on the surface or buried underground, blasting explosives are the most cost-effective way of displacing a large volume of material. Emulsion explosives have a lot of great advantages including safety and security, excellent resistance to water, increased velocity of detonation, transport, handling and storage, savings in drilling operations and low gas emissions.

Many factors contribute to increased sales of emulsion explosives. Developing countries are constantly on the quest towards rich materials through mining and quarrying. On the other hand, infrastructure projects like underground railways, road tunnels and construction projects all favour market growth.

Emulsion Explosives have been commercially available for over 50 years now and during this period, their popularity and production have been increasing year after year. In the process of manufacturing emulsion explosives, two basic pre-mixes are formed. The first comprises an aqueous solution of inorganic oxidizing salts, and the second, hydrocarbon fuel components, which provide the oil phase of the water-in-oil emulsion.
The unique feature of EE makeup is that they are insensitive to initiation and cannot sustain detonation without being sensitised. Due to this classification, the requirements for transporting EE matrices are much less stringent than the requirements for transporting traditional energetic materials. The simplistic transportation of emulsion explosives was the key factor underlying the development of bulk emulsion explosives.

Compared with India, the US is expected to rise at a steady rate by 2028, with around a 4.7% year-on-year growth by volume. This is mainly due to the country already being a leader in the market, so it is hard to achieve such growth. North American explosives producers are now looking at opportunities in the Latin American market, as there is a strong presence of precious metals such as lithium, silver and copper. This attracts significant investment from international mining companies, which is expected to increase demand for Bulk emulsion explosives.

The demand for emulsion explosives in China is expected to increase by a massive 6.2% by 2028, with the Chinese mining industry playing a substantial role in the Chinese economy. This is due to China being the world’s leading producer of steel, coal, aluminium, lead, rare earths, tin, zinc, tungsten and magnesium and other metallic minerals. The country’s emulsion explosives value is expected to reach over $262m by 2028.

NG dynamites possess poor safety properties during their manufacture transportation and use. For example, the use of dynamites is diminishing with time. Safer explosives such as emulsion explosives are gradually replacing them.

Volatility is the readiness with which a substance vaporizes. Excessive volatility often results in the development of pressure within rounds of ammunition and the separation of mixtures into their constituents. Volatility affects the chemical composition of the explosive such that a marked reduction in stability may occur, which results in an increase in the danger of handling.

Many explosives are toxic to some extent. Manufacturing inputs can also be organic compounds or hazardous materials that require special handling due to risks. The products, residual products or gases that make up explosives can be toxic, whereas others are harmless.

Using explosives when mining can cause a risk of entrapment following the collapse of a structure. Measures must be put in place to try and mitigate this risk and plans should be in place should this eventuality arise.

The Future of Explosives

The accelerated use of coal as well as rare earth metals such as silver and gold along with earth minerals like bauxite and iron ore in diverse industries like chemical, automotive, and thermal will foster the need for extremely potent explosive products.

New and modern explosives technologies are compatible with both augured and pumped loading techniques across wet, dewatered, and dry hole conditions. Companies active in the mining explosives industry are focusing on enhancing their research capacities to develop more innovative technologies that can let mining customers carry out operations more precisely and efficiently. The combination of modern digital technology, explosives delivery technology, and formulation chemistry is providing great leverage to mining customers. 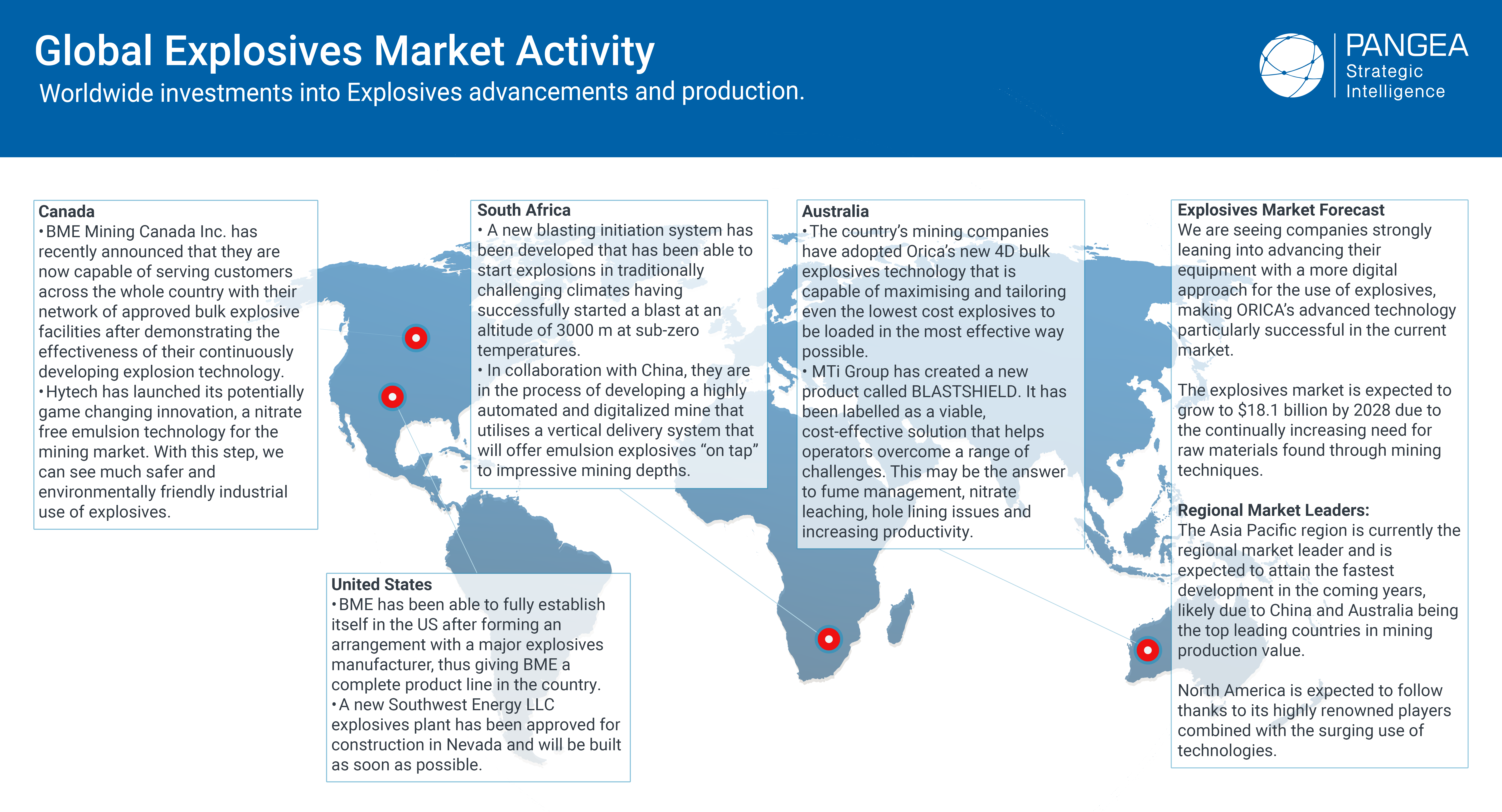 ✓ Safety precautions when using explosives?
✓ How do explosives fit within my project?
✓ The mitigation of policy, regulation, and financing challenges.
✓ Specific explosive requirements by country. 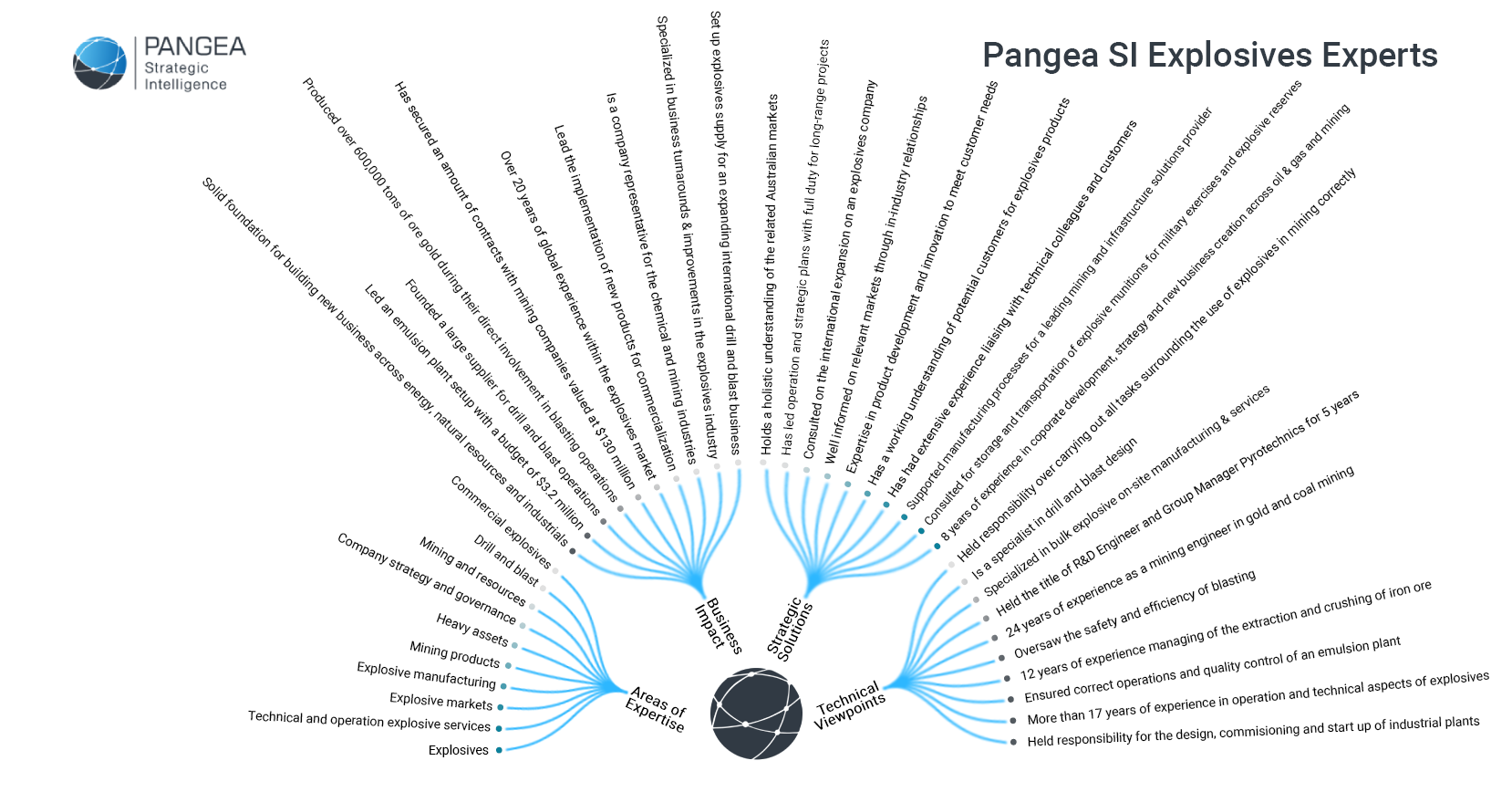 Our Explosives Experts can provide powerful insights into explosives and how they can fit into your project.