Note – this article was originally published on chesterenergyandpolicy.com

The Open PV Project was an ambitious undertaking which could have a profound effect on Solar Energy and analysis in the future. Unfortunately, NREL’s Open PV Project is no longer available. However, photovoltaic (PV) installation is available from Lawrence Berkeley National Laboratory’s Tracking the Sun report.

The Open PV Project, run and operated by NREL, tracked and made such publicly available solar data and provided vital information for any stakeholders across the solar energy industry. The dataset is undoubtedly massive, so a first glance proves intimidating. However, digging through Quora for the most common type of questions about the solar industry provides the ideal opportunity to walk through the data for anyone (even those who aren’t experts in solar) on how to take advantage of such a valuable resource.

What is The Open PV Project?

The Open PV Project was a collaborative effort between government, industry, and the public that compiled a database of available public data for photovoltaic (PV) installation data for the United States. Data for the project was voluntarily contributed from a variety of sources including solar incentive programs, utilities, installers, and the general public.

NREL’s data represented the best crowdsourced resource to identify the country’s solar installations, both large and small. NREL, one of the laboratories under the umbrella of the U.S. Department of Energy, offered this information to the public to help people, government entities, and industry to understand past and current trends of the U.S. PV industry.

Keeping the data complete, up-to-date, and accurate was critical for The Open PV Project to retain its value, so NREL noted that data was collected from all contributors willing to offer data– including state-run incentive programs, utilities, PV businesses and installers, solar advocacy organizations, consumers, and more.

Photo Source: National Renewable Energy Laboratory
In collecting this completed dataset, NREL encouraged contributors to include as much information as they have and find relevant, with categories including (but not limited to) the following:

Not every entry includes data for each category– the only data fields required to be filled out are date installed, size, location, and total installed cost (before any incentives).

To prove how useful this dataset can be, I’ll now answer some of Quora’s most pressing questions on the solar industry using just the information found on The Open PV Project. For those unfamiliar, Quora is an online question-and-answer resource where community members can seek out answers from experts to any question, with the top answer often ending up the top result on Google when someone asks the same question.

Equipped with the invaluable information from The Open PV Project, we can now provide the solar industry answers demanded by the Quora community:

Which U.S. state has the most solar powered homes?

California was head-and-shoulders above the rest of the country with almost 600,000 residential solar installations for over 4,000 MW. Other states in the Southwest join California in the top 10 of residential solar, including Arizona, Nevada, and Texas. The Northeast joins as the other region of the country highly represented, with large solar installation counts in Massachusetts, New York, New Jersey, Connecticut, and Pennsylvania.

We must consider, though, that some of these states might only fall in the top 10 because they are populous states. To check for that, we could factor in each state’s population to find the top 10 states in per capita installations:

As this list shows, many states are represented in the top 10 when calculated on a per capita basis. Even though California is so populous, they are still kings based on one residential solar installation for every 69 residents. However, Texas, New York, Maryland, and Pennsylvania fall out and are replaced with Delaware, Washington DC, New Mexico, and New Hampshire, who are each doing more with their smaller populations.

Why are there no solar panels installed on the Southwestern deserts?

Answering this question shows how publicly accessible datasets like The Open PV Project represent an opportunity to quash misinformation. Assuming this question is asking why the deserts of the American Southwest, with their abundant sunshine, are not being utilized for utility-scale solar power, then a quick analysis shows that there in fact are plenty of solar panels in these areas.

The Southwest almost always refers to Arizona and New Mexico and can also include California, Nevada, Utah, Colorado, Texas, and Oklahoma, depending on the context and who you ask. Given these states, a quick analysis of the data shows the following count of utility installations across the Southwest states:

Based on this, we can see that most of the states do indeed utilize their solar resources on a utility scale, and in fact they’ve done so for going on a decade or longer. But the person who asked this question is correct to ask why more isn’t being done, particularly in Utah and Oklahoma where no utility installations of solar are recorded.

Such a broad question cannot be answered with a simple yes or no, but The Open PV Project provided us with the necessary data to describe cost trends. Focusing on the three most common installation types– residential, commercial, and utility– the range of total system costs are shown in the following table:

Based on the more informative cost-per-watt numbers, we can see that residential and commercial systems tend to be about the same price, as they use the same rooftop solar technologies. Utility-scale installations, though, are somewhat more expensive because they are not simple rooftop installations, but rather full-fledged power generating sites that must include additional features– cooling considerations, transmission and distribution systems, etc. However, those additional features reportedly do lead to higher utilization rates and capacity factors, meaning the ultimate cost for electricity generation is more economic for utilities than for residential or commercial operations. However, all types of solar are already cheaper than new fossil fuel generation projects in many parts of the United States.

Not only did The Open PV Project elucidate the affordability of installations, but we could also plot the data over time to see how prices have evolved.

As is evident from the scattering of data points, much goes into the determination of a solar installation’s cost– factors such as size, location, installer, and unique aspects of the rooftop. Thus, coming up with a one-size-fits-all answer to “How expensive are solar installations” is difficult. But the trend lines do demonstrate that, on the whole, the cost per watt of solar is consistently falling across these three most common sectors. The dataset would also let you separate data to see what trends pop up across different regions, time periods, rebate programs, and more. But I can’t have all the fun on my own, so dive into the data on https://emp.lbl.gov/tracking-the-sun for your own analysis.

But in short: solar installations do have significant upfront capital costs, but those prices are dropping and becoming cheaper than other conventional energy generation sources. For residential and commercial installations, solar typically pays for itself in six to eight years through energy savings, with all savings after that point pure profit.

What’s the average cost of a 2-kilowatt solar installation?

Ending with a narrower question, this person wanted to specifically know how much a 2 kW solar system would cost. To answer the question we could have focused on all entries of the dataset within 10% of 2 kW, of which there 32,788 installations (88% of which are residential, so we can also narrow our view into those entries since the person asking is likely asking about such residential systems).

Graphing the total system costs of residential solar installations between 1.8 kW and 2.2 kW gave the following: 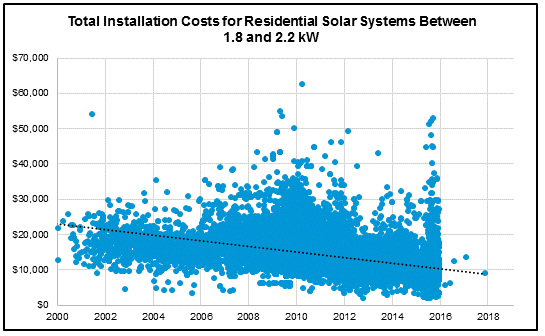 “As you can see, The Open PV Project made countless opportunities available for everyone to analyze the U.S. solar industry. The only question left is: what questions will we find the answers to next?”
– Speak to the leading Expert who wrote this article

Expert Bio:
Expert is currently an Energy Analyst at an energy research company, working on U.S. Federal Statistical System publications to vet analyses for data and factual accuracy as well as proofread and copy-edit them for writing quality and accuracy.

Expert is a Research Associate at a research institute – Subject matter expert in the energy industry, particularly as it relates to energy policy, efficiency technologies and initiatives, and the clean energy transition.

Expert is an independent Energy Analyst, Consultant, and Writer, publishing drawing on professional experience and independent research and analysis.

Role which includes evaluating and assessing U.S. companies in the energy industry, providing insights into the companies’ functions, performance, and future outlooks

Expert was a Senior Consultant at an American management consultancy firm

Worked with a U.S Energy Department in Office of Energy Efficiency & Renewable Energy on the Appliance and Equipment Standards Program, supporting the development of energy regulations with a focus on various lighting technologies.

Responsibilities were the following:

Conducting engineering and market analyses of existing technologies on the market;

Creating and analyzing a database of all major manufacturers and product SKUs to discover trends of performance, compliance with current and potential regulations, and comparing prices;

Assisted with the tearing down and reverse engineering of products to determine their component parts and prices; and

Oversaw the outside testing of products at a testing laboratory to compare advertised performance with advertised abilities.

Simply provide your details, to get connected to this Expert.
Did you enjoy reading this article? Share it with your network

If you would like more information or require expertise on this matter, speak to us today.

Operating Explosives In a Working Environment

How Europe Can Survive Without Russian Gas?

Are there sustainable residual opportunities for hydropower in Europe and in the world?

Technical Data Sheet Of A Compound

The Changing Requirements For Lubricants In EVs